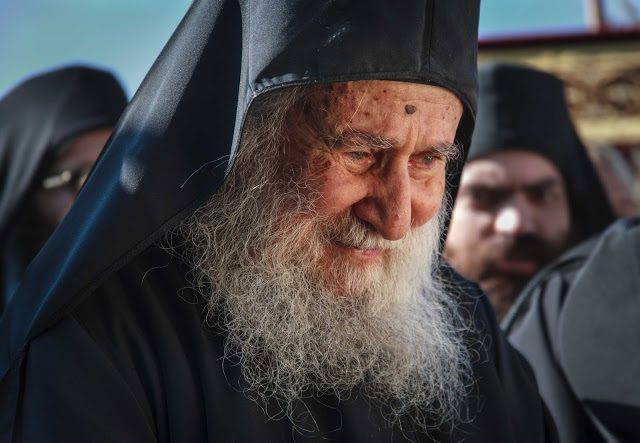 By Elder Joseph of Vatopedi

Humility penetrates and is penetrated, it doesn’t fear, doesn’t question, doesn’t seek and therefore doesn’t move. As truth in Himself, life in Himself and all-loving, Jesus also, rightly, has humility as the universal position of His personality. This is precisely what is transferred to those who follow Him and participate in it. It is demonstrated by this that humility is not merely a branch of moral law, which inverts the corresponding evil, as is the case with other virtues, but is an ontological feature of the integrity of people who by the nature of their existence are characterized as being self-contained, decisive and active in the certainty of their immobility.

At the other end of the spectrum are the characteristics of the absence of humility: uncertainty, fear, suspicion, need and- later- the undesirable mobilization of all kinds of lies and deception for salvation and safety.

A living image of this condition is the devil who suffers and activates all these negative positions of the perversion of the personality, and others like them. The outlook which is not humble, what we call egotism and pride, remains bogged down by itself in the mire of selfishness and individualism. It’s constrained by the suffocating framework of being a single unit, and, under pressure from the impersonal selfishness of individualism, diminishes constantly but increases in cowardice, uncertainty and isolation, until it bursts out in a variety of undesirably cunning attempts at self-justification. The constraints of nihilism do away with the notion of the absolute, of truth, of eternity, of the breadth of the union of all. Nihilists don’t recognize anyone other than their own sick selves. Nihilists evolve into anarchists, who don’t recognize any authority or divine or human dependence. They end up as atheists, which is the greatest of all the preceding woes, in essence becoming diabolical and utterly destroyed.

If you look carefully at his characteristics, what else is the devil? An individualist, a great individualist. He doesn’t welcome anything into himself except himself. Nor does he recognize any other principle, dominion or power. Always and everywhere he’s alone and, necessarily, a total nihilist, since nothing can get close to him. He went into self-exile, was expelled from everywhere and sits in the nothingness of his nihilism. This is why he fell. ‘I saw Satan fall like lightning from the sky’. This is why he was condemned: ‘the ruler of this world is condemned’ (Jn.16, 11). This is why he was expelled: ‘now will the ruler of this world be cast out’ (Jn. 12, 31). Outside every place and locus of life, the devil has a place only in the darkness of death, of perdition and of hell. He no longer has any place among other beings, because he expelled himself with his accursed individualism. This is why, since he himself is nothing, he tries to acquire significance and personality by treachery, lies and deceit and why he forms imaginary values that he pretends are his own, whereas, in fact, they don’t belong to him.

‘Wherever the basis of humility is missing, there’s no safety, because then the unity of all in Jesus, who is the peace of all and the resurrection, is also missing’.

This is the devil and this is the poverty of the egotism of his supporters, which forces them to pretend, to transform themselves, to act a part, because they want positions and honours of which they aren’t worthy, because, in essence, they’re destitute and poor because they’ve removed themselves from the body of others through their sick individualism. This misery is followed by all the other woes, culminating in hatred, envy and crime. The dark veil of death shrouds these unfortunates who’ve given themselves to the devil, these faded replicas of the murderer who sinned from the beginning and misleads, since he himself is a liar and the father of lies.

Βlessed and favoured people who are humble are meek, calm, serene, attached to virtue, opposed to evil, untroubled by any circumstance or threat. They live in the bosom of the faith, like infants in the maternal embrace of grace. They never live for themselves, because they’ve forgotten what that is. They’ve become one with the others; they become all things to everyone, in order to bring solace to them. They cry with those who are weeping and rejoice with those who are glad. Since, by grace, they’ve been absorbed into Christ the Saviour, they bear all burdens, without ever distressing or embittering other people. In the fullness of their love towards others, even towards irrational creation, by their submission to every other person, they provide whatever it is that circumstances demand while, at the same time, disappearing into the cover of their humility so as to pass unnoticed. They avoid the limelight, turn down honours and don’t seek gratitude. They’re beloved by all and never have any enemies. If ever there’s cause for them to be taunted and judged, the charges against them won’t stand up to a personal confrontation. The mystical protection of grace which accompanies them inspires fear and veneration in other people and their decisions and feelings are changed in a trice. Those who were at first accusers are transformed into servants. But even irrational creation, animate and inanimate, changes its roughness in the presence of humble people. The divine grace which enfolds them is perceptible immediately by the harsh elements and the wild animals, which cease their natural activity and are transformed into servants, because, around humble people, they scent their first lord, sinless Adam, who approached them and gave them names, as their master and godfather.

In the presence of humble people, we can all discern the character of Christ the Saviour, of the New Creation, the new Adam. He Who fasted in the desert, was with the wild animals and served by angels; He Who walked on the water and rebuked the winds and the storm; He Who cast out evil demons, Who cured the disease that affects all humankind by vanquishing death; He Who gave life, Who became and is ‘the Resurrection of all’ and Who praised the humble, saying ‘Blessed are the poor in spirit for of such is the kingdom of heaven’.

According to the Fathers, humility is a gift of the Holy Spirit, not merely a human accomplishment. It’s given to those who desire it, seek it and work painstakingly on the things which contribute to the successful acquisition of this blessing. Humility begins with the humble outlook and ends with behaving humbly. People who don’t attribute to themselves abilities greater than those possessed by others and who think humbly about themselves, begin to value their fellow human beings, accept blame when they’re admonished and listen to advice. They become gentler in character, restrain their anger and are easily moved to sympathy. If they make this position dependent on God and do so as a conscious effort of Christian morality, they pray to God and beg Him to strengthen them. Then they make progress, by God’s grace, towards the feeling of more perfect humility, which is a gift of God. There are also people who are naturally gifted with meekness and humility, and though this is praiseworthy, it’s not worthy of reward, because these qualities have been acquired without labour, struggle and effort.

There’s also the unnatural state of humiliation in which people found themselves after the Fall, when they simultaneously lost their nobility, eternity and immortality and subjected themselves as slaves to death and corruption. Humiliation, as fall, devastation and failure exists, unfortunately in all of us, but more so in those who believe they’re extra special. Here this is not humility, the spiritual value given by God to those who are perfect in virtue, but rather the personality that has fallen away from its natural bounds into an unnatural life and way of behaving, both in outlook and action.

We mention this because those who desire to be worthy of the gift of humility should know that the greatest contributory factor in this is recognition of the passionate state into which all the passions have brought us after the Fall, as well as the noxious consequences of a sinful life. People ask: ‘How can we become humble? We answer: ‘Discover your humiliation; where you are; where the devil, sin and various other causes have made you blunder. After you’ve become aware of that, repent, and, if you weep over it, you’ll acquire spiritual humility, which God will grant you’. There are two ways, equally effective, whereby we can measure the depth of our fall. We’ve just mentioned one way- the ascending, superior form.

The descending, inferior form begins from the first position of the personality at our creation. What were we like as God’s first creation? God word’s enough to tell us, since He says we were made ‘in His image and likeness’. We were simple, good, gentle, whole, sober, just and, generally unimpeachable, entirely lambent and devoted to God. We know nothing of any need, pain, fear, danger, corruption or death, our terrible enemy. That’s a brief picture of our personality before the Fall, our real personality. And we abandoned the eternal benefits of unfailing bliss, which we had inherited by being enfolded in God’s paternal embrace. If we now turn back here to where we are, each of us separately and all together, we’ll see that we’re wretched and humiliated, in the most shameful and miserable of lives, which differ not at all from death. I ask those who want to become humble and don’t know how, isn’t that in itself enough for them to realize where they are?

We know the grace of God, which has been given to us through the Cross and the Resurrection of Christ. ‘But to those who received him and believed in him, he gave the right to become children of God’ (Jn. 1, 12). Again, in his first epistle, Saint John says, ‘but we know that when Christ appears in his second coming, we shall become like him’ (I Jn. 3, 2), so that, according to Paul, we shall be ‘heirs of God and co-heirs with his Son’ (Rom. 8, 17). The gift of God through Christ our Saviour has raised us to this grace of adoption, of theanthropism and of glorification. Through the sacraments of the Church and the observance of the commandments, all the faithful receive and ‘potentially’ have all this grace within them, so that they can become children of God and siblings of Christ. Proof of this are the saints of our Church, who – as Christ said – did as He did and performed even greater works by His grace.

If each of us examines where we are in our inner and outer world, on the basis of the sanctity and deification that belong to us, we’ll find our humiliation and our wretchedness, into which we’ve been dragged by the devil and sin. If these two ways which we’ve explained are understood in relation to our individual knowledge, they are of the greatest assistance in finding the principle of the humble outlook and after a fitting struggle and repentance, we will attain genuine humility, if we so wish. +